What is Forgiveness Capitalism?

You can see my recent Quora post here and upvote it if you want to help: https://www.quora.com/What-is-forgiveness-capitalism/answer/Joseph-Baker-70

Interesting question “What is forgiveness capitalism?”.

I see myself as a master in the realm of forgiveness finance.

I bring together contracts that include forgiveness, it’s value to create a new kind of digital money with deep connections to the human heart. I’m talking about emotions of empathy, hope, love – even anger, rage, disgust – all purified through the act of forgiveness. Making the injured party whole. Restoring honor to the one causing the injury. I show the world how it is better and more instructive to the world for a matter to be publicly recorded. I show how we can reward acts of charity, forgiveness and noble goals and in doing so create a new kind of digital money backed up by infinite human worth.

How to issue this worth – what systems do we need in place to make this work?

We need a small cadre of people who will be patient to receive their remedy. The offer of forgiveness is conditioned. There is this forgiveness contract . The contract comes in the form of notices. The notice has a deadline. Any objection must be signaled before the deadline. We provide a method of registering the objective at a very low cost. It becomes evident through certain proof of mailing techniques that the other party received the series of correspondence letters. It becomes self evident to all who look into the matter that the party did not object to the offer of forgiveness.

Terms of the forgiveness contract – that’s where capital comes into play.

I’d like to talk about the human heart. I think that forgiveness is another form of alchemy. Through this transformational act, I feel that we are changing a debt into an asset. A rare asset presently. The level of success my projects have may turn it into the basis of nearly all future money. I certainly have high hopes of this. I intend to make lots of people very, very wealthy, make sure that everyone’s monetary needs and desires are met. Is this a crazy dream? I might be wrong. And I have to say at the outset that this is a socio economic experiment of epic proportions. It could fail. I feel I have to say that because there are so many building blocks.

I imagine within 5 years there being 1000 times more value represented in the world and in the hands of everyone.

I’ve found oil springing forth from the earth – to use an analogy. A wellspring of infinite value within each and every one. We can tap this value in the form of written contracts.

Charity becomes the first use case. Forgiveness is a form of charity. The tokens become a receipt, a proportional measure of how much charity toward this cause one holds.

Projects. We can fund projects. home and FPL Wheel of Forgiveness will be like an issuing authority. A pioneer in this newly raised cost signal to the world economy.

Providing the mechanisms for markets to engage with these new asset class. Offering exchanges to trade these values back and forth. Each one being able to support the value of another’s by swapping tokens – in this way they can anchor and support one another’s values. It won’t be long before the currencies of the world become irrelevant to the people of the world with the skyrocketing potential I see here.

I should add one other throught. I had a researcher friend of mine do a cursory study on forgiveness as it applies to finance. He found an admission in the book “Confessions of an Economic Hitman” that either the International Monetary Fund or the World Bank (I don’t recollect at the moment) issued loans to small third world countries that they could never pay back. Later at default time, the countries would systematically be offered conditional forgiveness _IF_ they would join the United Nations. One might imagine that their votes might also be for sale at this time.

So one can get quite imaginative in forgiveness negociations.

Just wait until my forgiveness contract with the police agencies responsible for an officer stomping on my head goes into effect. Read about it here: Remedy.Baker – A forgiveness Contract offer to the Police who attempted to kill me.

I feel like the wealthiest man in the world. Because I feel that I’m the first to be able to monetize forgiveness and I have such a huge transgression against my life to forgive – and I sense that this sort of money might just catch on in a big way. 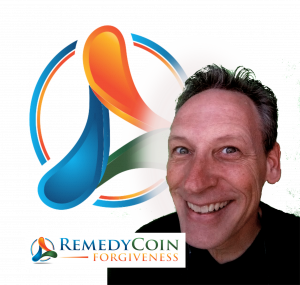 Scroll down to see some ideas and examples. This is why you need to be in crypto long term to be able to buy RemedyCoins against Government caused injuries. To be able to trade a new sort of Government Debt Obligation (GDO).
WordPress Appliance - Powered by TurnKey Linux